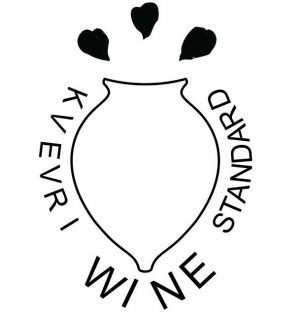 In The Wine Cellar

can also be used for the clay jars of other countries like:

1.a) Clay, clay quarries and the manufacturing of kvevris in Georgia

The traditional manufacturing of kvevris and the clay used to make them were examined as part of a GIZ project for the promotion of kvevri-wine production in different regions of Georgia.

Kvevris generally differ concerning the quality of clay mixtures, manufacturing process, firing temperatures and, last but not least, the finished product. The examinations showed that not a single kvevri was completely tight without additional treatment of the inside surface. Comparable clay vessels from other countries reveal a similar picture. Thus the potter’s diligence and experience are crucial factors whether or not a large clay vessel is suitable for the making of wine.

1.b) Waxing the kvevri on the inside surface

High quality kvevris do not need to be waxed or coated with other substances. However, to be tight most kvevris have to be sealed on the inside surface. The sealing should be done with pure beeswax. The best moment for a first waxing is immediately after the kvevri has been fired and still has a temperature of about 70 – 80 degrees, so that the wax deeply penetrates into the pores.

Only pure sterilised wax may be applied.

When waxing is repeated or when older Kvevris are waxed which are already sitting in the ‘’marani’’ (the place where the kvevris are buried in the ground), the kvevri should be heated to 70 degrees with a kvevri-stove and should then be waxed.

1.c) Coating the kvevri on the outside

Only beeswax but no other material should be applied to seal the inside of the kvevri.

Only lime but no other material should be applied to coat the outside of the kvevri.

1.a)  Waxing the kvevri inside

High quality kvevris do not need to be waxed ore coated with any other material.

Many kvevris are sealed with pure bees wax on the inside. The right moment for the first waxing is immediately after the kvevri has been fired, when its temperature is still about 70 – 80 °C. The wax can then penetrate deep into the pores of the kvevri.

Only clean and sterilized bees wax must be used.

For waxing or re-waxing of older kvevris that have already been kept in the “marani” the kvevri should be heated inside by a “kvevi stove” up to the appropriate temperature and then waxed.

No other material than bees wax should be use for sealing a kvevri on the inside.

1.c) Coating the kvevri outside

Many kvevris are coated outside. This should be done with a layer of lime.

No other material than lime (and in certain cases mixed with stones) should be used for coating the kvevri on the outside.

Certain kvevris have never needed to be waxed.

Each time waxed kvevris have been used they are cleaned and some wax is rubbed off. The wine producer has to decide for himself if and when to re-wax his kvevri.

In some cases it might be necessary to coat the kveri on the outside with lime and stones up to 15 cm thick, to protect the kvevri against damage from tree roots and water. But a thick coat may change the quality of microoxydation of the kvevri.

Inserting the kvevri into the marani

The marani has to be dug deep enough to hold all kvevris of different sizes in an upright position. All kvevris should have their openings abreast.

The space around and between the individual kvevris is filled with soil up to about some centimetres above the rim of each kvevri.

Some wine producers reinforce and protect their kvevris on the outside by coating them with lime, stones and debris. Bit by bit a 10 – 15 centimeter thick layer is applied to the outside of the kvevri before the space around is filled with soil.

In other countries or regions where houses are traditionally built with cellars, large clay vessels are free standing and arranged in a hollow or support cradle. The walls of free standing vessels (amphora, küp, karas, tinaja etc) are much thicker than those of the kvevris in the soil.

Some wine producers consider the thick layer of lime and stones to prevent the wine from evaporating. Others claim that thick layers of stone and lime protect the kvevri against damage from dampness and tree roots.

There are no strict regulations for wine pressing. More or less different ways of processing, in particular in East and West Georgia, Kakheti, Imereti, Kartli, Meskheti, depend on the local tradition and grape varieties.

In East Georgia (Kakheti) the grapes (red and white) are stomped in a hollowed out tree trunk or in a stone trough.

In West Georgia (Imereti) the grapes (red and white) are stomped in a hollowed out trunk or hazelnut tree.

Powerful electric wine presses do not produce the same quality of juice as hand-pressed and squeezed grapes do.

West Georgia: The juice only or, depending on the grape variety, a part of the grape skins and stems are poured in to the churi for fermentation.

East Georgia:With exceptions, the juice and all grape skins and stems are poured into the kvevri for fermentation.

The start of the spontaneous fermentation process is based on the natural („wild“) yeast of the used grape.

The use of „laboratory yeast“ is not allowed.

During fermentation in the open kvevri, the mash has to be stirred several times per day so that all parts of the grapes stay in constant contact with the juice.

White wine stays with or without the pomace for several months in a closed kvevri.

Red wine is separated from the pomace during or shortly after fermentation.

As for red wine the skins, seeds and stems also remain in some cases in the kvevri for a longer period before they are separated from the wine.

In West Georgia, after fermentation, the rim of the churi is covered with light clay and then closed with a round wooden lid of two or more parts

In East Georgia, a coil of light clay is put in the rim of the kvevri which is then closed with a stone plate. Just before closing a sulphur wick is kindled and fixed into the clay. After that the kvevri is sealed.

Then wet clay is piled up and compressed on top of the slap or the wooden lid to the level of the marani base. The clay has to be kept slightly wet in order to seal the kvevri/churi well.

Kvevris/churis may be closed with a thick pane of glass. Chemical-and solvent- free joint mortar can be applied to join the glass pane to the rim of the vessel.

Another possibility is the use of a silicon- tube between the pane and the vessel. Here a weight (heavy stone) is needed to press the pane down and seal the vessel.

A siphon can be fitted into the central opening of the pane. Instant checking of the wine is thereby easy and possible at any time.

The smoke of the burning sulphur fills the space between wine and the pane of the kvevri and supports an airtight storage.

Fining and filtering the wine

Kvevri wine does not need filtering.

Some time after fermentation of the white wine, grape skins, seeds, yeast and lees begin to sink to the bottom of the kvevri/churi and the wine slowly becomes clean and clear.

With red wine, if the grape skins and seeds were separated before, the time for fining will be shorter.

The total amount of Sulphites (SO2) in white wine should not be higher than 40 mg/ltr.,and in red wine not higher than 30 mg/ltr.

Other artificial treatments are not permitted.

Before sealing the kveri a burning sulphorized strip may be put on the rim. The sulphuric smoke then protects the little headspace between wine and the lid of the kvevri from dangerous bacteria.

A plastic bowl containing high proof alcohol swims on the surface of the wine so that bacteria are kept off the space between wine and kvevri cover.

Cleaning and preserving the kvevri

No artificial (chemical) cleaning material is permitted for the kvevri/churi. Exceptiona are soda, citric acid and hydrogen-peroxide.

The cleaned kvevri can for a longer time be keept dry, but also wet. It can be coated with lime, or with oak ash, cooked in water.

A dry kvevri can be sprayed with chacha (high % alcohol).

The cleaning of kvevris/churis has been made easier by use of hard wearing modern brushes and pressure cleaners.

Especially for preserving the empty kvevri until its next use, the inside coating of the kvevri/churi with oak ashes has been very successful.

Burning wooden twigs inside the kvevri until the fire goes out because of the lack of oxygen, is a traditional way to preserve the empty vessel. It then has to be closed quickly.